SUBMI​T YOUR ABSTRACT
A Great opportunity to get Global Recognition for your research work, submit in the form of abstract through online. Abstracts should contain 250-300 words of your presentation & biography and upload a photograph

Join us at “Neural Networks 2021” with affordable packages including both registration and accommodation for two days conference includes oral presentations, poster presentations, workshops, symposiums and special keynote sessions conducted by eminent and renowned speakers who excel in the field of AI and Neural Networks, register for this conference with the suitable options mentioned in the registration page

Track 1: The Next Generation of Artificial Intelligence

The field of artificial intelligence moves fast with the implementation of different technologies which may be easier for humans to work on every task. We’ve seen that current Artificial Intelligence technologies suffer from various limits with a lack of the capacity for Personalization, Adaptability, and Self-learning. Smart Agents technology is an AI tool that will reduce the lack of capacity with newly developed features.

With today’s technology, it’s possible to analyze your data and get answers from it almost immediately by using Big Data analytics. It determines the large amounts of data to uncover hidden patterns, correlations, and other insights with more traditional business intelligence solutions in a smart way. A big data boom is on the horizon, so it's more important than ever to take control of your health information, for banking, Government, life science, and for many sources that are related to the organizations.

Motion rehabilitation is progressively required owing to an aging population and suffering from stroke, which means human motion analysis, must be valued. Human motion is implicitly required in several fields such as healthcare, sports, video surveillance, body-based user interfaces. A deep-learning-based system is proposed to track human motion by using computer vision based on image and video processing, lower layers may identify edges, while higher layers may identify the concepts which are related to a human.

Artificial intelligence is already used in many ways. Now it's time to consider how much it will influence to create and to consume music. AI has become an answer to a simple demand, more music is needed than ever with the development of using different protocols and AI tools like audio mastering, tuning, and streaming the music. Maybe it heavily impacts the creative process of any musician, the future may demand musicians to have in-depth technical knowledge of neurosciences.

Artificial neural networks are based on the conviction that works with the human brain by making the right connections, can be imitated using silicon and wires as living neurons and dendrites. An artificial neural network is nothing but a biologically inspired computational model that consists of processing elements and connections between them, as well as of training and recall algorithms. There are several types of Neural Networks such as Feed Forward ANN, Feed Back ANN, Learning vector quantization, and many more.

Cybersecurity is one of the main concerns for today’s digital world for purposes of security by using AI emerging technologies. Artificial intelligence can improve security as well the same technology can give cyber criminals access to systems with no human intervention. AI applications with Cybersecurity will overcome the problems with cybercriminals by using some tools like security screening, security & crime prevention, AI-powered threat detection, and Detection of sophisticated cyber-attacks.

As new technologies are been defined for security reasons, the biometric security system was one of the latest upgraded technology which includes the design and implementation of the enabling hardware and software of the sensor. Biometric security systems have gained a lot of ground in terms of advancements in technology and widespread use however, there is still a lot of reluctance to adopt the technology worldwide. It is used in many aspects in the form of Face recognition, biometric access for attendance in an organization.

Virtual Reality is the use of computer technology with an artificial environment. When you view virtual reality, you are viewing a completely different reality than the one in front of you. Many virtual reality apps are using 3D animated scenes with attaching sounds, graphics, photographs, and many features involved with real-time simulation and interactions through multiple sensorial channels.

Augmented Reality is mainly used in apps for smartphones and tablets. It is a similar form of technology that line a combination between the real world and a virtual scene generated by a computer that augments the scene with additional information. AR apps are used with the camera of the user phone for the images, text, sound, video is overlaid onto a real-world environment to enhance the user experience.

Robotics and Mechatronics mainly deal with the application of modern systems and control methods for practical situations. Robotics deals with the configuration, development, operation, design, and use of robots like a robot management system, sensory feedback, and information processing. Mechatronics deals with robotics, computer, telecommunication, product, and many more with the combination of software, electronic, and mechanical designing.

If you look at today’s AI application in the gaming industry, you will note that AI is mainly upgraded in-game experience and design. They have different components that are powered by Artificial Intelligence and related applications in video gaming features. It also helps to increase the player's interest and satisfaction over a long period of time. AI uses some mechanisms that are not immediately visible to the user that is related to data mining and procedural-content generation.

Machine learning is one of the most exciting technologies which involve computers discovering, how they can perform tasks without being explicitly programmed and automatically improves through the experience of using algorithms. It is a subset of artificial intelligence related to computational statistics. It focuses on making forecasts using computers, but not all machine learning is statistical learning.

Blockchain offers an intriguing solution for IoT security and auspicious for a web of things security for identical reasons like data tampering, locking access, and also works for cryptocurrency. The modification of IoT security wishes determination as results of flowing from sensors and embedded processors. Blockchain IOT security requires a large amount of processing power for blockchain mining.

In deep learning, convolutional neural networks (CNN) are most commonly applied to analyzing visual imagery and are regularized versions of multilayer perceptron which are fully connected networks to each neuron in one layer that is fixed to all neurons in the next layer.  CNN has many applications like image and video recognition, recommender systems, image classification, medical image analysis, natural language processing, and financial time series.

Enterprise AI is a division of enterprise software that harnesses new technologies and implementing artificial intelligence techniques to drive digital transformation. It requires a new technology stack for developing and deploying Enterprise AI at scale and also changes the business environment in the fields of industries, delivering new opportunities through automated, intelligent products. It describes the processes of intelligent automation such as machine learning, deep learning, cognitive computing, and natural language processing (NLP).

Natural Language Processing focuses on system development that allows computers to communicate with people using everyday language. It is divided into two categories are Natural Language Understanding and Natural Language Generation. This natural language generation is used to converts information from the computer database into readable human language and vice versa.

Machine Learning is a platform for the organization to grow in their business lifecycle of using predictive applications which are capable of processing big data using machine learning related techniques. The many cloud computing platforms that provide these web services for machine learning are Amazon, Google, Microsoft, and IBM Cloud. It requires a lot of infrastructures, programmers who were familiar with ML, and data analysis were expensive for this platform.

Autonomous Robots have the ability to make their own decisions and then act accordingly by themselves, without explicit human control. Autonomous robots are intelligent machines and also are particularly desirable in fields such as spaceflight, household maintenance like cleaning, wastewater treatment, and delivering goods and services.  Artificial intelligence, robotics, and information engineering are considered as a subfield of autonomous robotics.

Data mining for robotics is to upgrade the algorithms for Linked multicomponent robotic systems, Single robot hose transport, and Reinforcement learning. As per data mining Robots works by control loops and reactionary mechanisms with the use of machine learning. An autonomous software package with enough smartness to act as your personal assistant for allotted communications tasks on behalf of autonomously by using artificial intelligence is known as an intelligent software agent.

Support vector machine is highly approved by many as it produces significant accuracy with less computation power. It is a simple algorithm of using a machine learning model with associated learning algorithms that analyze data used for classification and regression analysis. The SVM mainly focuses to find a hyperplane in N-dimensional space (N — the number of features) that distinctly classifies the data points.

The goal of this is to provide a detailed review of how AI is being applied to fighting cancer. The report will analyse the utilization of many AI tools, machine learning, natural language processing, image processing, speech recognition in diagnosis, therapy, research and development, and health management such as patient data, insurance information, and hospital stay as it relates to cancer. Also, significance will have the types of algorithms based on artificial neural networks, deep learning, and many more that have been developed so far in the field of cancer.

The global market for smart machines reached $6.6 billion in 2015. The market should reach $7.4 billion in 2016 and nearly $14.0 billion in 2021, a compound annual growth rate (CAGR) of 15.0% from 2016 to 2021. These machinery are generally at a stage of development, so it will be necessary to consider the market at least as far out as 2024 to obtain essential results. This market reports discusses the development and future sales of key enabling technologies for the next generation of smart machines 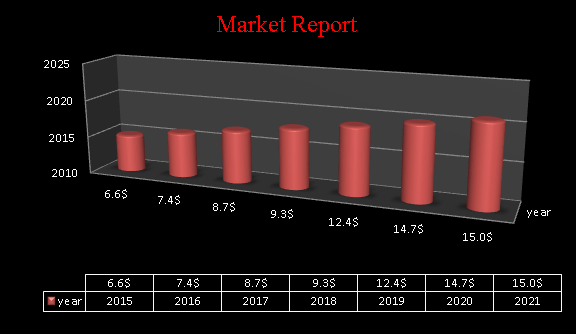 The market for whole robots, robot parts, robot software, and related safety materials now approaches $22 billion. BCC Research forecasts it will rise at a five-year compound annual growth rate (CAGR) of 5.9% between 2013 and 2018, when it’s expected to surpass $29 billion. Robotics: Technologies and Global Markets provides both a review of recent key developments in robotics and a forecast that examines the industry from the perspective of robot makers and their traditional and prospective end users.  The study itself is divided into eight chapters followed by an appendix.